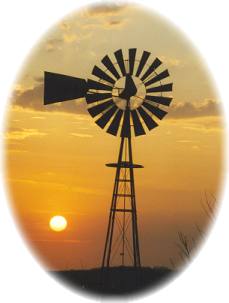 In the 1870's, Sylvia was a sand mound about 300 yards around its base and was located on the Thompson ranch. You could see where men had lain while they shot buffalo. Prairie dogs and rattlesnakes were very numerous. The land on which Sylvia is located was deeded by the State of Kansas to the Atchison, Topeka, and Santa Fe Railways Co. in 1884. In 1886, the land was deeded to H.S. Thompson and his wife, Mary, then immediately transferred to the Sylvia Town Company whence it was platted as the town of Sylvia and finally incorporated in 1887. The name Sylvia was given the city by A.A. Robinson, a vice president of the Santa Fe railroad in honor of his wife. Mr. Thompson insisted the the name of the town being Zenith in honor of the local Star Route post office. A compromise was reached when Mr. Robinson agreed to put in another post office station five miles west and call it Zenith. Quoting from the Leavenworth Times, correspondents traveling through Sylvia in 1886, said, "Nature had intended this site for Sylvia."

Sylvia extends a small-town welcome and hopes you visit our museum for more area history.

A wood frame building was built to be the first church in Sylvia. In 1911 the board members realized the church was too small for the congregation. A two story brick building with full basement was built and the first service was held in September 1912. Over 100

To Sylvia calendar of events

Things to do near Sylvia, KS