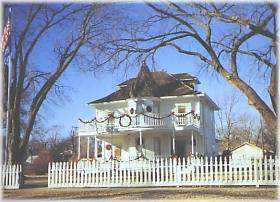 The passenger station originally built by the KCM&O here remains, home of the Canton Area Museum....