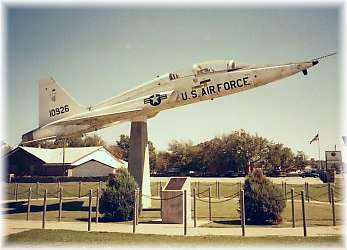 The T38 Talon Training Plane was flown into Salina by Commander Burl "Peanuts" Rice and a memotial plaque reads:

"In honor of all the men and women of Mayes County who have served in the armed forces of our great country in peace and war. The Cleo Farr Post #240 Salina American Legion of Oklahoma dedicates this T38 Talon Training Plane, especially to those wo gave their lives so that we might enjoy peace and freedom. We will forever remember all who served and gave of their lives so we might enjoy all the freedoms of this great country.

Things to do Aviation near Salina, OK