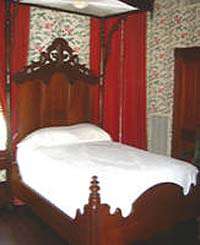 A U.S. military post was established in 1849 at Fort Graham. As the line of settlement moved westward, the need for the fort ...