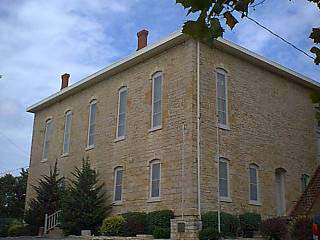 Today, the building is used as the Territorial Capitol Museum - Lane University operated by the Lecompton Historical Society and contains three floors of artifacts which include information from Pre Civil War Kansas, maps, books and documents along with Lane University and period furnishings and memorabilia. The building is listed on the National Register of Historic Places.

The native limestone building was completed to the bottom of the first floor windows when the United States House of Representatives defeated the Lecompton Constitution by only eight votes. Then followed passage of the Lecompton Constitution in the U.S. Senate and President James Buchanan encouraging its adoption. This meant that Kansas failed to enter the Union as a slave state with Lecompton as its capital.

By early 1858, it was evident that Lecompton was not going to become the Kansas Capital and as the money had been spent, work on the capital ceased. At that time, the foundation for three wings had been laid, the center section had been completed up to the top of the first floor windows, and all the materials needed to complete the section, including four pillars, were laying on the ground.

It was in this shell that the Lecompton people attempted to stop James Lane from destroying the town in 1856. With the help of Camp Sackett Cavalry, they succeeded in stopping his assault. Lane was attempting to rescue the "to be" Governor, Charles Robinson from jail, as he had recently been tried for treason. He was acquitted, but was being held while certain legal formalities were completed.

It was also from here that the 13 stone masons who were working on the building picked up their guns and headed south on the Lecompton road to meet Col. Shombre and Captain Walker, in their projected attack on Lecompton. This was to be known as the Battle of Fort Titus.

The university started in the Rowena Hotel, which was a three story stone structure built for the legislators to live in while in session.

The building was completed in 1882. It had a self-supporting roof, architecturally unique in the area at that time. The building was dedicated June 21, 1882. It was at this college that D. J. Eisenhower and Ida Stover met and decided to marry. They later became the parents of Dwight D. Eisenhower, who was our 34 th president.