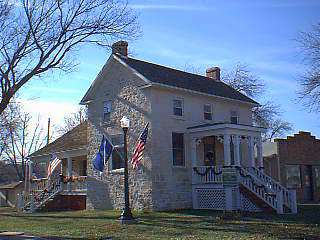 With its foundation laid in Kansas Territory, the Terwilliger Home was built alongside the famed Santa Fe Trail as Kansas became the 34th state.

Built by Abraham and Mary Rawlinson in 1860-61, this stone home was the last house freighters passed going West when leaving Council Grove as late as 1863.

From their home on the edge of the frontier, the Rawlinsons witnessed long trains of freight wagons loaded with goods, heading to or from Santa Fe. This home was a welcome sight to the freighters, as it signaled their return to civilization.

The property was purchased by William Riley Terwilliger in 1870, who added the South wing by 1873. The Terwilliger family came to Morris County in 1859, and he was at times a farmer, stockman, freighter, and owner of a livery stable.

The Terwilliger Home is one of the four oldest homes remaining alongside the Santa Fe Trail in Kansas.

Currently, a bakery cafe operate in the restored part of the house.

This 300-year-old bur oak (just the trunk remains) served as the unofficial post office for travelers on the Santa Fe Trail from 1825-1847. Passing caravans could leave messages for future travelers in a cache in the base of the tree. A stone building erected in 1864

Things to do Historic Homes near Council Grove, KS