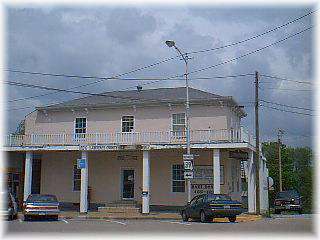 This imposing structure on the north side of the square was built at a cost of $16,000 in 1874 (two years before Custer's Last Stand). The front was used for county offices, with the massive limestone jail in the rear. Iron balls were inserted in recesses between layers of stone to prevent their movement. Old time sheriffs occupied the upper floor as living quarters.

A 12-foot scaffold was built in front of the jail for its first execution in 1877. A crowd of nearly 5,000 filled the square to see murderer, Sam Orr, "Jerked to Jerusalem" as the local paper reported! Two other men were later hanged on the east side of the building, Charlie Seaton in 1891, and Ed Bateman in 1906. With the invention of the electric chair, executions were moved to the state penitentiary in Jefferson City and Missouri sheriffs were no longer faced with this grisly task in their own counties.

Many know that Harold Bell Wright's, "Shepherd of the Hills" was the most widely read book of fiction in the history of publishing! Few know, however, that many of the places, events, and characters are based on actual models. There really was an "old shepherd of Mutton Hollow,&

Mt. Vernon Chamber of Commerce operates an office and visitor center at the start of the Ozark Mountain Parkway (Route 265)

Grave of the Old Shepherd

In his book, "Old Matt's View of It," J.K. Ross wrote about the death of the Old Shepherd from Mutton Hollow. He was gored to death by a bull. A Civil War tombstone marks the grave of James Marion Wood, who met this untimely fate in 1910

Things to do Pioneer Life near Mt. Vernon, MO