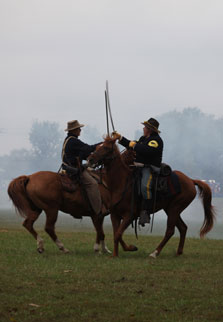 The Battle of Pilot Knob took place at The Battle of Pilot Knob State Historic Site (formerly Fort Davidson State Historic Site) and the surrounding area on September 26-27, 1864. By nightfall on the 27th, over 1,000 Confederate and about 100 Union soldiers laid dead or wounded on the fields of battle. The battle saved Jefferson City from attack, preventing the Confederates from retaking Missouri's government. In the month that followed many soldiers were buried in the rifle pit of the fort and in unmarked graves in hills surrounding it.

During the battle, Lt. David Murphy screamed from atop the parapets, "There was never a prettier place to die than right here!" But now, scrap yards, stores, more development, and water towers threaten the battlefield and surrounding scenery.

In 2014, the Re-enactment of the Battle of Pilot Knob took place during the sesquicentennial of the civil war. The Friends of Fort Davidson are also instrumental in bringing the re-enactment to life every three years as a tribute and memorial to those who fought and died in this bloody battle.

To Pilot Knob calendar of events

Things to do near Pilot Knob, MO