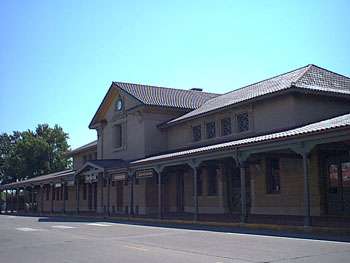 Adams County, and Hastings in particular, are "children of
the railroads," having been founded and sustained by rail companies between
the 1870s and 1960s. Hastings owes is very existence to an intersection of two
railways, the Burlington and Missouri River and the St. Joseph and Denver City
lines. Although most of Hastings is built on former Union Pacific land, Adams
County has always been Burlington country.

Known as the Burlington and Missouri River (1871), the Chicago,
Burlington and Quincy (1880), the Burlington Northern (1970) and the Burlington
- Santa Fe (1995), this railroad built its main line through the country, constructed
the most elaborate depot and had a division office here the longest. It was
the Burlington which brought the fabled Zephyr to Adams County, and on its road,
Nebraska's last commercial passenger trains, via Amtrak, continue to run. When
the Burlington Railway Depot was completed in 1902, Hastings was the third largest
railroad center in Nebraska. Designed by Omaha architect Thomas R. Kimball,
the station is an example of Spanish Colonial Revival architecture. The building,
which welcomed presidents Taft, Truman and Eisenhower, is on the National
Register of Historic Places.

Studded in bright lights, the Strand Theatre marquee heralded first-run showings of such movie classics as "From Here to Eternity" and "The sound of Music." For almost seventy years the Strand was the grand dame of motion picture entertainment in Hastings. The Strand'

Things to do Railroad History near Hastings, NE