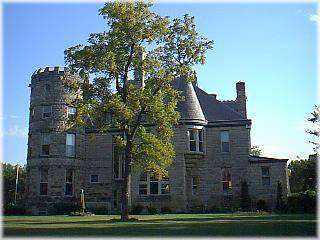 Not a typical riverside residence in the least, but definitely one of the boldest homes built during the early period of Wichita's illustrious growth is the Campbell Castle. Built in 1888 by Burton Harvey Campbell, this architectural masterpiece was duplicated from architectural drawings of the "mother" castle which was originally constructed in the foothills of Scotland. But it is more than mortar and limestone, it is the result of one man's dream and several architects' expertise.

Listed on the National Register of Historic Places for it architectural significance, the Scottish castle has been delicately restored after years of neglect to its original beauty and splendor. When the Campbells left in 1910, the mansion was bought by Walter Morris. Fifty years later it became the property of Maye Crumm, who began calling it Crumm Castle. For a period of time it housed the Belle Carter School, an institution which was begun and operated by Crumm. However, in the 1970's the upkeep of The Castle became a constant struggle, and to raise funds for its survival, the 28-room mansion was opened to the public for tours of the main areas.


In 1994, Terry and Paula Lowry purchased the property. Out of respect for Campbell and his vision of over 100 years ago, they returned his name to the structure - The Castle Inn Riverside, "The Historic Campbell Castle." Damaged stones were painstakingly removed and replaced with new stones carved by expert masons. The woodwork and floors have been brought back to their original luster. The roof has been reslated with tiles from Vermont. The electrical and plumbing systems were completely replaced, and the third floor ballroom level was converted into five luxurious suites. The Carriage House, which had been legally condemned by the city and was crumbling, was rebuilt and now houses three suites and the Lowrys' apartment. What once were structures composed of stone, mortar, wood, and glass, The Castle and Carriage House have now been reconstructed using massive steel beam supports which will fortify this magnificent landmark for scores of years to come.

Now you can escape to the romance of another era, of sunlight shining through pastel stained glass onto intricate woodwork and exquisite antiques in this Inn along the Riverside.

The Wichita Western Heritage Tour is unique in that it includes not only the traditional element of the "wild west,"

Relive the 1870s at Old Cowtown Museum, a 25-acre, outdoor living history center on the banks of the Big Arkansas River off the Chisholm Trail. Walk the wooden boardwalks to a recreated Old West cattle town. Of the 60 structures on grounds, 27

Spanning over one hundred years of Wichita's proud history, the Wichita Scottish Rite was designed by noted Architects, Proudfoot and Bird, and boasts one of the most ornate surroundings in the downtown area. Listed on the National Register of Historic Places

Wichita's first historic property, the Historic Sternberg Mansion was built for the areas most prolific builder and all at a time in the late 1800

Things to do Historic Homes near Wichita, KS