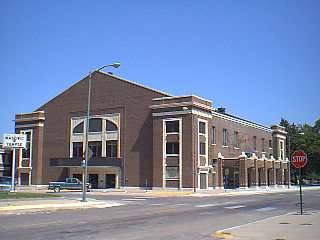 Well-known buildings are usually notable for their architectural
size or history. That is certainly the case of the City Auditorium, constructed
between 1922 and 1924 at a cost of nearly $130,000. City fathers originally
envisioned a showplace containing a bandstand, museum, and outdoor mall with
bleacher seating for 20,000 people. The dimensions of the final plans, 126 x
175 feet with a capacity of 2,650 were more modest, but the building is still
immense by local standards. What really set apart the City Auditorium are the
events it has hosted. Nearly everyone in South Central Nebraska has attended
events such as school concerts and graduations, fifty years of the Shrine Circus,
community concerts, trade and hobby shows, pancake feeds and scouting events.
Recent renovations to the building, call a "Monument to Community Spirit"
when it opened over 75 years ago indicate that it will continue to be one of
the most used city facilities in the next generation.

Hastings Museum.... What a wonderful world!

From immense polar bears to tiny hummingbirds, the many forms of animal life from around the planet are on display in dioramas representing the natural habitat of each.

Things to do Architecture near Hastings, NE