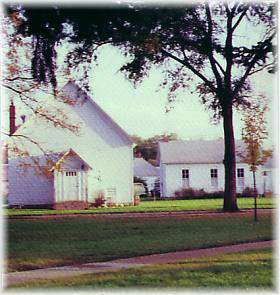 This one room country school was built around the year 1880, on a site nine miles north and west of the City of Cozad on land owned at that time by David Adle and Christiana Frost Adle. This school was called "The Adle School" because it was on Adle land, although it should have been called "The Block School" because so many Block children attended it. There were five Block brothers who came from Germany and all settled together west of Cozad and there were 47 children produced from these five original families and all of the Block children attended District 86.

In one room was a big coal burning stove. There were from 20 to 30 pupils who attended from grades one through eight. The teachers always stayed at Block or Adle homes. Every day the pail of water was carried to school until eventually a pump was put outdoors near the schoolhouse. There was a teacher's desk, a blackboard, a recitation bench, a stage curtain, a piano, and various kinds of student desks. Some of the desks were on runners.

This was a very active school, not only full of students in the daytime, but many evening community activities were held there. The desks were on runners so they could be pushed to the side of the room for social activities. There was a neighborhood PTA, a Literary Society, and a Grange Group that met there monthly.

In the 1950s, some consolidation of schools began because it was more feasible as the rural school child population declined. District 86 merged with 81R but it had been in consistent use for seventy-eight years.

The school house on the Adle property was given by Dorothy and Archie Smith to the Cozad Historical Society in 1960. It was 80 years old at that time. It was placed south of Cozad for many years, waiting for a permanent location. In the spring of 1985, it was moved to its permanent location beside "The Little Church By the Park" on the north side of Cozad City Park. It was moved by the Robert Henri Museum and Historical Walkway Foundation and will be repaired and restored as nearly to its original state as possible. The school contains most of the original furniture; the large curtain was from the Ringgold School south of Cozad. It contains advertisements from businesses in Cozad. This was a popular item in early country schools. The school contains the original teacher's desk, students' desks and a map case. Eventually, there will be a piano, a teacher's log, a school bell, a collection of original text books and antique playground equipment.

It is the hope of the Foundation that modern children will have some idea of what it was like to attend a country school 100 years ago. Although the old country school may have lacked the modern technology of computers and projectors, it was a place filled with love, fun and dedication to the learning of the basic skills necessary for all children. An old country school house is a place of lovely memories.

Things to do Historic Schoolhouses near Cozad, NE