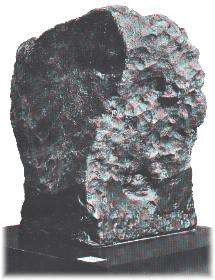 After various meteorite fragments were found in the field one of Nininger's probes hit something hard and firm underneath the soil. A cautious effort to dig for the meteorite began.

In all, Mr. Nininger reported that the main mass of the find, plus fragments weighed about 749 pounds at the location. When the fragments that were collected were added, the total weight now is about 800 pounds.

Come visit us in Hugoton, Kansas

Things to do Natural Attractions near Hugoton, KS

When the wagon trains turned south at Chouteau's Island from the Santa Fe Trail, to go down to the Cimarron River at Wagon Be...