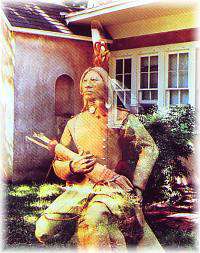 Listed on the National Register of Historic Places for its unique architectural style and its historic association with Native American fine art and culture, the Jacobson House is located in the former residence of Oscar B. Jacobson built in 1917.

The center was opened in 1987 to preserve the home and legacy of Oscar B. Jacobson and his American Indian students. As the first director of the University's School of Art, Jacobson mentored and promoted the famous "Kiowa Five" Indian Artists. Their success initiated a renaissance of Indian painting on the Southern Plains, known as the "Oklahoma School of Traditional Painting," which continues to influence the evolution of Native American art today. OU's art program for American Indians was the first of its kind in the United States or elsewhere.

The Jacobson House is a significant historic site and art gallery with connections to Oklahoma history and the international art world. Exhibits, classes, poetry readings, art demonstrations, book and video libraries are among the resources available to the public.

This award-winning 18 hole course ranks in the top ten in Oklahoma for the sixth straight year in a row! Perry Maxwell first designed this course in 1951 and Robert Cupp redesigned it in 1996

OU ranks No. 1 per capita in the nation among all comprehensive public universities in National Merit Scholars. This year, one out of every 15 freshmen entering OU direct from high school is a National Scholar. The 1999-00 freshmen class includes 10 National Scholars, including 134

Located in a city park known as "Legacy Trail," the north side of the depot is now the home of the Norman Arts and Humanities Council. Grounds can be used for special events and currently display public art sculptures of bronze and wood produced by Oklahoma artists. On the

Things to do Arts near Norman, OK