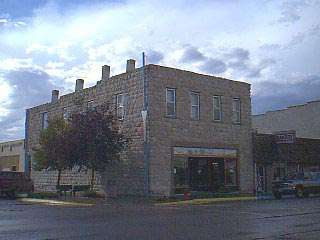 The Stone Building is a two-story structure built in 1893-94 of rough-cut, locally quarried limestone. Listed on the National Register of Historic Places, it is the oldest commercial building in Kimball and was built by John Biggs, who operated a lumber and hardware business and later a general merchandise store in the building. The second floor was a community center and dance hall until the Fraternal Hall was completed in 1905.