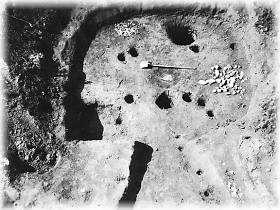 On a prominent natural terrace of Weeping Water Creek, the Davis village, located near the town of Weeping Water, is the most extensively studied community of the Nebraska Phase. This culture flourished along the Missouri River and its tributaries from A.D. 1100-1400 and represents the beginning of a new lifeway for eastern Plains Indians typified by construction of substantial timber-frame, earth-covered dwellings; a sedentary settlement pattern; and increased reliance on domestic plant foods, particularly corn. Listed on the National Register of Historic Places.

Things to do Archaeology near Weeping Water, NE

These sites located throughout Saunders County have been registered as National Historic Places because of their v...

The Ashland Archeological District, registered on the National Register of Historic Places, contains a variety of t...