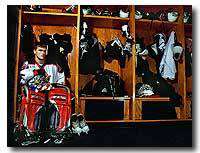 After three years as a professional team in the Central Hockey League, the Topeka ScareCrows are now in the United States Hockey League. The Crows compete against 12 other teams in this developmental league aimed at helping young players perfect their game a bit more before moving on to NCAA- or professional-level hockey. Home games are at Landon Arena, which will comfortably seat 8,000 fans for hockey. The action will be fast, furious, and affordable.

Admission: $7-$15.
Hours: October through March
Address: Landon Arena at One Expocentre Drive
Phone: 785-23-CROWS
Our Website:www.topekascarecrows.com/
Tickets for the season, groups and individual games are available.

Come visit us in Topeka, Kansas

The Topeka Zoological Park occupies a beautiful setting in Gage Park. Intimate views of nearly 400 animals from all over the world add to the reputation of the Topeka Zoo as one of the nation's finest small zoos. Major exhibits include Hill's Black Bear Woods, Animals and Man (

Established in 1865, Washburn University is one of Topeka's greatest assets and is the only municipal university in the nation. The 160

Things to do Professional Sports near Topeka, KS