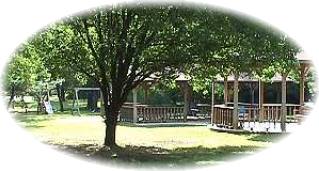 Towanda is a peaceful town nestled in the pleasant valley of the Whitewater River, on the edge of the Flint Hills in between the lights of several larger towns, but out of the rush, and bustle of those large cities. It is a town where you can still sit on the front porch, walk down tree-lined streets and know your neighbors.

People can escape from it all, and come home to the nostalgia of small town living at its best. Towanda maintains the friendliness and attitude which appeals to families and businesses alike. Towanda is reaching back to maintain the charm of our nations past, and reaching forward to offer conveniences that today's families need. As a city of 1700, Towanda has a city Library, Historical Museum, several city parks, swimming pool, and many locally owned restaurants and businesses. Not far away, you can find excellent areas for fishing, hunting, golfing, picnicking, camping, hiking, boating, and biking.

Children can participate in Scouting and a year-round city sponsored recreation program. Events are held at our Community Building and our golden agers can gather at the Senior Citizens Center, or socialize with our very active Lions Club and Pride organizations.

The first settler in the Towanda area was C. L. Chandler. Having little success in his search for gold, he was returning with a wagon train of other gold prospectors by way of the Santa Fe Trail. Near what is now North Butler County, they encountered a party of Indian traders who told them glowing tales of a place to the south along the Whitewater river. After hearing the tales, Chandler and two others headed south in search of the big spring flowing from under the hill, where Towanda now stands. They found lush bluestem; a clear, flowing steam full of fish; lots of green trees along the banks; and an abundance of elk, deer, antelope, and buffalo feeding nearby. Chandler built a cabin in 1858.

In 1863, Chandler sold his buildings and land for $3 an acre to James R. Mead. Towanda was the last settlement on the way west to (Santa Fe) New Mexico. All territory west of the Whitewater River was Indian Territory.

"Mead's Ranch" became a very active trading post. An Indian agency was established in the building in 1864 and operated until the Indians were moved to the new Indian Territory in 1867. The Indians came to exchange furs for food, staples, blankets, and trinkets. They also came to the trading post to receive their scant rations of provisions and clothing issued by the government. It was here that Colonel Leavenworth made his headquarters and negotiated with Satana, Chief of Kiowas, and "Heap of Bears", the great Medicine Chief of the Arapahos. This resulted in the Treaty of Medicine Lodge.

Mr. Mead made many friends in his seven years at Towanda. He was a trusted friend of many Indian tribes and knew such legendary figures of the old west as: Kit Carson, William "Buffalo Bill" Cody, and Jesse Chisholm. In 1870, Mead sold the property and, along with J. S. Munger and William Griffenstein, he moved farther west and laid out a townsite along the Arkansas River. It was called "Wichita."

Isaac Mooney purchased the post and the 200 acres, south of present Main Street, for $2000. Rev. Mooney then filed Homestead papers on the land north of Main and platted the original townsite.

The town's name origin is unknown, but records show the post office was called "Towanda" when established in 1860. The most widely believed is that Towanda is an Osage Indian word meaning "many waters" or "rushing waters" stated in writings by Mrs. Dan Cupp, an early settler.

For many years the great spring which flowed from the mouth of a small cave provided the town's water supply. In 1912, the city built a retaining wall above the spring to keep rock and dirt from filling it up. During the oil boom the water became contaminated with oil and high salt content and unfit for use.

Over the years, the City of Towanda and its residents have faced many perils. They have survived two destructive tornadoes; boomed with the discovery of oil in nearby fields only to shrink as the oil wells diminished; faced flooding conditions and dust storms; and outlasted the depression years. But through it all, the strength of a small rural community of friends and relatives, the city lives on.

Established in 1999, the Towanda Area Historical Museum is housed in the Historic Masonic Lodge Building, which was constructed in 1904. We are dedicated to the care and preservation of the culture and history of the greater Towanda, Kansas area.

We currently do not have any events for Towanda, Kansas in our database. If you know of events taking place, please add the event
.

Things to do near Towanda, KS

Holmes Sundry is a 1920's drug store, established by Hazel Holmes. It boast a working soda fountain and lunch counter in it'...

MUSIC AT THE EMMA - 8 Wonder of Kansas Customs

Jam sessions EVERY Friday night at the Emma Chase Cafe (or out-of-doors on Broadway, weather permitting). MUSICIANS and LIST...