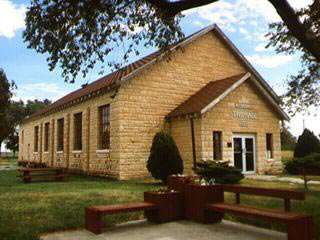 Construction for the Township Hall started in 1934 as a Works Progress Administration Project (WPA) with completion and dedication in 1939. A prime example of the community spirit of Nicodemus, the Township Hall became the center for elections, community meetings, weekly dances, and other social functions. The WPA projects were planned by the federal government to help communities across America out of the Great Depression. As a result Nicodemus received a Township Hall.

During the two-year project, twelve local men worked on the completion of the Township Hall. The stones for the building were quarried near Webster Reservoir in Rooks County and transported to town under the supervision of Gilbert Alexander, project manager and timekeeper. As the community watched, Garold Napue cut and patterned the limestone with a mallet. At one point a limestone privy was also constructed on the north side of the Township Hall. The Township Hall has undergone few changes over the years.

The present day Township Hall looks relatively the same with a few exceptions. On the outside, between the years of 1939 and 1977, the front doors of nine glass panels on top with a solid lower panel were replaced with glazed aluminum doors. The Hall has received several new roofs with the existing red-brown asphalt shingle roof installed in May of 1986. The limestone privy was demolished sometime after 1983. On the inside, around 1980 a dropped acoustical tile ceiling was installed and the floors were refinished. In 1982, wood paneling was added throughout and bathrooms constructed at the north end to the right and left of the stage. The theatre chairs were reupholstered at this time. By 1983, mini-blinds covered the windows.

The National Park Service presently leases the Township Hall from the Township Board to house the temporary Visitor Center.

Admission: Free Admission
Hours: Although hours vary depending upon staff availability, we strive to keep the Visitor Center open from 8:30 a.m. to 5:00 p.m. daily throughout the year
Address: Second and Washington Street
Phone: 785-839-4233
Our Website:www.nps.gov/nico
The Visitor Center is closed on Thanksgiving, Christmas Day, and New Years Day. Please contact us prior to your visit to confirm Visitor Center operational hours to ensure that you will not be disappointed.

Things to do Historic Buildings near Nicodemus, KS

The Opera House Building was built in 1905 and presently is occupied by a local business. ...

The original Carnegie Library was built in 1912, with the help of a $10,000.00 grant from philanthropist, Andrew Carnegie and...