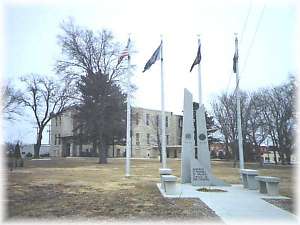 The cornerstone of the Trego County Courthouse was laid in 1888, and the building was completed in 1889. It was constructed from Trego County hard stone and finished with Manhattan stone because they could not find enough Trego County hard stone. The building was designed by George R. Ropes, an architect from Topeka, Kansas. It featured the American Queen Anne Style with an Elizabethan frontage. The highest cupola reached 100 feet in the air and the original tin roof was imported from Europe.

In 1951-1952 the original roof was removed to make it a "modern-looking" building. The roof was also in disrepair and this was the method chosen to repair it. Since the main portion of the building remains the same, the Trego County Courthouse is one of the oldest still in operation in Kansas today.

In June 1974 several scenes of "Paper Moon" were filmed in the Courthouse. The jail in the basement was also used until it was condemned in 1976. Presumably, the Jail was pre-made elsewhere and shipped in. It's unusual features included flat bars instead of round ones and a different locking system.

On its front lawn of the Courthouse is a war memorial dedicated in memory of the valiant service our soldiers gave to our country.

Come visit us in WaKeeney, Kansas

Big Creek Golf Course is one of the nicest 9 hole, grass green golf courses in Kansas. Putting greens, a driving range, and rental carts are available. Ladies Day is held on Tuesday afternoon and Men'

The Emanuel Lutheran Church was constructed in 1902

The cornerstone of the Trego County Courthouse was laid in 1888, and the building was completed in 1889

This attractive building, which houses the city administration office, was built in 1937 of native limestone.

To WaKeeney calendar of events

Things to do Historic Courthouses near WaKeeney, KS