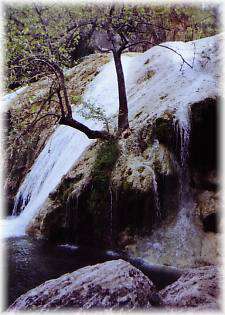 This is Turner Falls fed by Honey Creek, one of the most beautiful sights in Central Oklahoma. Water, rich in calcium carbonate flows over the Falls and forms the mineral, travertine. Usually the water in a waterfall wears the rock away, but not so here. The water actually deposits Travertine on the falls and builds the rock out in the honeycomb formations we see here. This is a very unique occurrence. There are only a few places in the world we can find travertine. There are similar falls in the Grand Canyon, and the city of Rome, Italy, is built on travertine. This is another wonderful example of nature at work in the Arbuckle Mountains. "Tombstone" formations document uplifts from prehistoric times. Such geologic evidence of the earth's development is present at only two other sites in the U.S. : the Grand Canyon and South Dakota's Black Hills. Murray State College in Tishomingo conducts geologist-led tours. The largest waterfall in Oklahoma, Turner Falls emanates from the many springs in the Arbuckle Mountains forming Honey Creek. It then cascades tumultuously down a seventy-seven foot fall to a shimmering pool at a rate of 5.5 million gallons per day.

On entering the park, you are first impressed with the breath-taking view of the spring-fed stream running around native cut-stone buildings built by William I. Brogden. The cabins in the center of the park are known as Brogden Courts. The "Castle" was originally built as a summer guest house and ranch house ( WynFyre Ranch )rented by Dr. Ellsworth Collins, professor and author, and resemble English architecture poised high above the water's edge.

Turner Falls is the anchor to over 6200 acres of recreational pursuits. Visitors to Turner Falls Park can enjoy a variety of amenities including RV hook-ups, limited cabin rental, primitive camping, swimming, hiking, spelunking, birding, and of course, shopping in the vintage village and gift shop.

The holiday season is a particularly alluring time for visitors as the "Winter Fantasyland" illuminates the Park. Fiery colors of light dance on the undulating waters creating one of the most fascinating holiday light displays.

Turner Falls Park can easily be accessed after a short scenic drive less than 5 miles beyond the interstate.

The man for whom Turner Falls was named was of Scotch heritage; his wife, Laura J. Johnson, a Chickasaw Indian. They were married in Shelby County, Tennessee in 1860.

Mazeppa Turner served in the Civil War under General Nathan Bedford Forrest. He fought in the battles of Shiloh and Chickamauga being wounded twice.

The Turners lived in the log cabin located north of the falls on the creek beside the later 77 highway for only three years. Their livelihood depended upon farming and the gleaning of honey from the many bee trees along Honey Creek. Mazeppa and his adopted Indian son, Tom Hayes, explored the caves around the falls.

The Turner Family moved to Davis in 1900. Mazeppa Turner was the first representative of Murray County and made the first speech in the State House of Representatives. He helped to draft the State Constitution and was instrumental in getting the Oklahoma School for the Deaf built in Sulphur.

Mazeppa Thomas Tuner was a well-educated man and a devout Christian. He reasoned: "No man is nearer God than the man who can see God in a dew-drop."

Come visit us in Sulphur, Oklahoma

To Sulphur calendar of events

Things to do Natural Attractions near Sulphur, OK