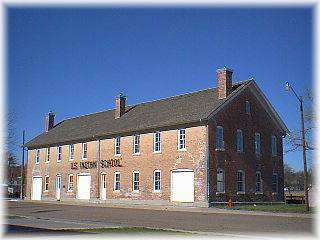 Founded in 1884, the U.S. Indian Industrial School was located on 320 acres in the town of Genoa. Opening
with only one building, the school grew to include thirty-nine structures on 640 acres and a maximum student population of
600 children. The two-story brick shop building, constructed in 1907 and listed on the National Register of Historic Places, housed the
blacksmithing, carpentry, tailoring, and harness-making shops. The harness shop contains wall murals, hand painted by the Indian boys, that depict
horse teams and harness ware, providing visual instructions for the students in harness-making.

Other buildings
that still remain include the 1910 horse barn, the 1917 dairy barn, a cattle barn, the blacksmith shop constructed
about 1922, the machine shed built in the 1920s, and several cottages, which served as residences for school
employees. The school was one of twenty-five bonded, non-reservation boarding schools operated by the
Bureau of Indian Affairs to provide academic and vocational training to Indian children. It was one of the first
non-reservation schools (and the only one in Nebraska) to give instruction for grades one through twelve. The
school closed in 1934. The Manual Training Building is presently owned by the city of Genoa and used as a museum.

In the mid 1870s when the Pawnee were moved to Oklahoma Territory, the school became vacant. The government decided to use the Pawnee Agency for the establishment of an Indian Boarding School with money appropriated from Congress in 1882. On February 20, 1884, with an enrollment of 74 students, the U.S. Indian Industrial School at Genoa was started. The school was in operation for fifty years and became one of the largest of the Federal Boarding Schools. In 1932, the peak enrollment was nearly 600 students.

The school stressed assimilation into white society with a combination of manual training and basic education. The students spent half a day learning a trade and the other half learning reading, writing and math. With these skills, students would become successful. The boys were instructed in agricultural activities, livestock production, blacksmithing, harness making, tailoring and shoe repair. The girls were instructed in nursing, baking, sewing, and laundering.

The students came from over twenty tribes. They were placed in classes according to their ability and the education that they received from their reservation schools. Their ages ranged from four to about twenty.

The Genoa Indian School was run on the military model. The students wore uniforms and marched. They answered to reveille, roll call, and taps. Parades were a common occurrence and drew people from the town of Genoa to watch. Companies were established with certain students becoming captains. Practice during free time was held in hopes that their companies would win awards.

Sam B. Davis is given credit for the schools's success. During his thirty years as a superintendent at the Genoa Indian school, many changes were made. Building were added and indoor plumbing was introduced.

Extracurricular activities were included in their education along with the vocational and educational skills. The athletic teams played area schools and were very successful. The teams competed in basketball, football, baseball, and track. The band and orchestra were a sense of pride at the school. The band competed in many competitions winning awards. Concerts and plays were planned and attended by the people in Genoa. Other activities included girl and boy scouts, choir, Saturday night dances, camping trips and hayracks The boys made many trips to town where they made friends with some of the boys in town. The girls were also allowed to go to town but of course must be escorted.

The school closed after the first semester in 1934. The students went back to their reservations, attended other boarding schools or went on to college. After hearing that the Indian School was closing, the people in the town of Genoa tried unsuccessfully to keep the school open. The decision had been made and the school closed.

Things to do Indian Heritage near Genoa, NE