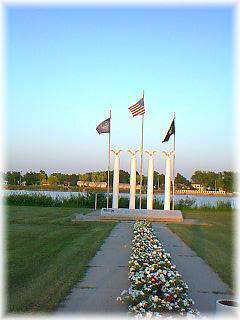 Located on the west shore of Lake Helen, this memorial is a reminder of sacrifices made by veterans and their families of all wars. The names listed commemorate local residents who gave their lives.

If you are able,
Save for them a place inside of you
and save one backward glance when you are leaving
for the places they can no longer go.

Be not ashamed to say you loved them,
though you may or may not have always.
Take what they have left
and what they have taught you with their dying
and keep it with your own.

And in that time
When men decide and feel safe to call war insane,
take one moment to embrace
those gentle heroes you left behind.

Things to do Memorials near Gothenburg, NE