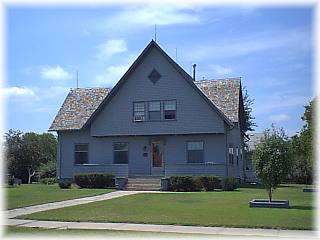 The dwelling was built for Swedish immigrant
Victor E. Wilson, who was elected to the state
legislature in 1909. During the teens Wilson served
as state banking examiner and was also elected
state railway commissioner.


Listed on the National Register of Historic
Places, the frame house, constructed in 1906-7, is
completely sheathed with wooden shingles and
exhibits elements of the Shingle style. The parlor,
which boasted a massive chimney with flanking
bookcases and half-timbered ceiling and walls,
housed Wilson's library table, which converted into
a billiard table. The parlor was remodeled in later years.