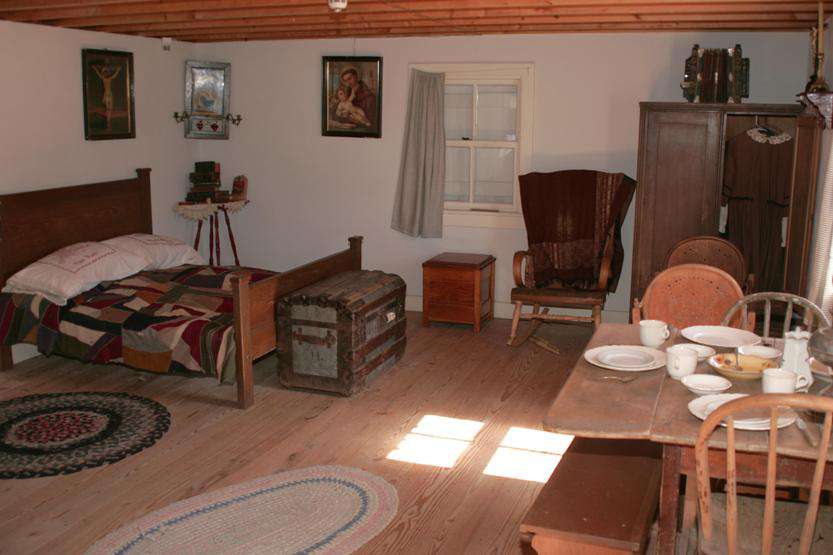 Located on the grounds of the Ellis County Historical Museum is a replica of a Volga German house furnished with authentic household items used by the Volga German settlers.

The first homes built by our early settlers were constructed of sod. Typically the homes were 28 feet long and 16 feet wide. Sod walls were 6 feet high with two half-windows in each wall and one front door. The ground would be excavated to a depth of three feet, with the sod set aside to form the walls. Trees and saplings formed the rafters and support for the roof. The interior of the house contained two rooms: a small anti-room containing the "mud stove" and the cooking utensils, and a large room which served as the living, dining, and sleeping area. The walls were plastered with clay and whitewashed with Lebaster, a type of plaster of paris.

Many Ellis County residents are descendants of German immigrants who came from the Volga River region of Russia. These settlers were people who migrated from Germany to Russia following the end of the Seven Years War in 1763. They were invited to migrate to Russia by Catherine the Great, who was born in Germany and was the leader of Russia at the time. As an inducement to these potential immigrants, she promised freedom of religion, freedom from military conscription, free land and an exemption from taxation. They settled in villages on the eastside of the Volga River (hence, the name Volga-Germans) and turned to building their lives in their new homes.

In 1874 the reigning Czar began to remove the privileges Catherine the Great had promised the Volga Germans. Consequently, the Volga-Germans began to search for a new homeland. In 1875 they sent a scouting party of five men to America to inform themselves of the climate, soil and living conditions suitable for their farming lifestyle. These scouts found the Kansas plains similar to the steppes region of Russia and a large number of the Volga-Germans decided to migrate to America. In October and November of 1875, many of these immigrants left their villages along the Volga River and traveled to Saratov, Russia to begin their journey to America. The first Volga Germans arrived in Hays the middle of February 1876 and traveled south to settle land along the Big Timber Creek. Liebenthal was the first community to be founded on February 22, 1876. The other communities of Catherine, Herzog, Pfeifer, Munjor, and Schoenchen were settled during the spring and summer of 1876. Although they had the same religion, ethnicity and culture, they continued to focus on life in their individual communities. Just as they had done in Russia, they retained their language with the various dialects that were spoken by the people of each village. Each individual village also retained traditions of food, family, religion and marriage
For more informaiton about the Volga German Heritage of Ellis County visit www.germancapitalofkansas.com

Pete "Fritz" Felten, Jr. was born and raised in Hays. Pete was a track star and expert swimmer in high school and spent one year at Fort Hays State College. His interest in art and sculpting began during his time of service in the U.S. Navy between 1952 and 1956

The road in downtown Hays City that is now known as Main Street was originally called Chestnut Street in the late 1800s and early 1900s. The word "City" was officially dropped from the name Hays City in 1885 and by 1930