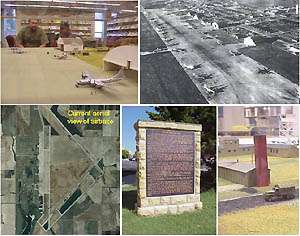 The model of the Walker Army Airfield that is on display at Forsyth Library on the campus of Fort Hays State University was completed in October 2000 by Fort Hays State University student Steve Arthur. The Walker Army Airfield was located in Ellis County, about 2 and 1/2 miles northwest of Walker. Although the land where the airbase was once located is currently on privately owned property and not open to public access, the road leading north and west from the town of Walker is a county road that goes past what use to be the main entrance gates. The old abandoned smoke stacks, several remaining hangar buildings and many concrete foundations are visible from the road. The miniature airbase display shows the relationship of locations for several of the hangars, barracks, supply buildings and other structures that would have been located west of the main airbase runways.

In 1942, airfield sites with runways long enough to handle the B-29 Bomber were established at Great Bend, Pratt, Salina and Walker. The Walker Army Airfield began operations as a satellite field of Smoky Hill Army Air Field located in Salina. In this capacity, Walker was used merely as a spill over field in the performance of Smoky Hills' mission of processing heavy bombardment crews for over seas shipment. Land was purchased by the government from individual land owners and additional areas were leased from the Union Pacific Railroad for the location of storage yards. In planning the field, the water supply was a particularly difficult problem. Principally because this site was judged by the state's geologist to have the most difficult water situation of any spot in the state. A proven supply was made available from the City of Hays system located 12 miles away.

Construction on the Walker Airbase began on September 14, 1942 and within two months there was enough completed to allow for limited occupancy with the arrival of military personnel from the Smoky Hill Army Air Field. In February 1943, the airbase was given its own independent mission when the 2nd Air Force organized the 6th Heavy Bombardment Processing Headquarters. Later that year, training of B-29 crews for combat duty began and in August, the first B-29's were brought in for training purposes. The base was somewhat of a final staging area after crews had been assembled. The men came to the Walker Airfield to learn to work together for the bombing runs and practice gunning. The training program of the 17th Bombardment Operational Training Wing continued to be the mission of the airbase until September 30, 1945. With the victory over Japan in August 1945, the number of training stations were decreased and eventually, disposition of property became the main activity of the base during 1946. The base became officially inactive on January 31, 1946 and it was transferred to the U.S. Army District Engineers on December 19, 1946.

To learn more about the Walker Airbase, we encourage you to see the memorial marker on the north side of the Hays Public Library. It pays tribute to the men and women who served our country at the airbase. The Library and the Ellis County Historical Society Museum also have materials and photographs of the airbase. A framed painting of the Walker Base is on display at the Hays Welcome Center - 2700 Vine, and you can drive around the perimeter of the former airbase property just to the north and west of the town of Walker. Because this is private property, absolutely no visitor access is allowed, but from the county gravel road, you can see many of the building foundations, two hangars and other taller structures that are now crumbling and falling down.

For more information about the Walker Army Airfield and the B-29 Bomber in Kansas, visit this website. www.shptv.org/b29/

When the Germans settled on the Kansas high plains over a century ago, after homesteading their farm and establishing a church, the next priority was to build a schoolhouse. This schoolhouse was originally built in Russell County in the 1870'

Things to do Historic Airfields near Hays, KS