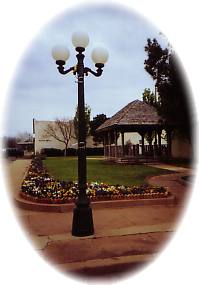 A self-described "small town with a big heart," the city of Walters is the center of opportunities, located five miles east of Interstate 44 and State Highway 5 in Cotton County.

The original townsite lying just north of the present Walters was named McKnight on honor of Maj. H.D. Knight, Registrar at the Land Office in Lawton. In 1901 when application for a Post Office was made, it was learned that another town was named McKnight in old Greer County. Maj. Knight's son was named Walter, as well as one of the town's first commissioners, W.R. Walters, so the town was renamed Walter, later to officially receive the final "s" in 1917.

For visitors and locals, Walters hosts several special events each year, starting with Gallery on the Green, held the first weekend in May. This annual arts and crafts show is sponsored by the Oklahoma Arts Council and the National Endowment for the Arts. The annual Comanche Indian Powwow is held each July in beautiful Sultan Park, and offers a modern blend of dance, family reunions and festival activities celebrating "the return home." Also in July, Walters celebrates the three-day Round-Up Club Rodeo, an event highlighted by the Round-Up Rodeo Parade.

For everyday rest and relaxation, Walters also boasts an 18-hole golf course, numerous parks and a city swimming pool, plus two antique/craft malls. The City of Walters invites you to make our city "your hometown too" and to experience our rich heritage of pioneer and Native American cultures.

Lake Boyer was built in 1936 by the WPA and named for Dave Boyer, Walters' pioneer businessman and former state senator, who was instrumental in making the project a reality.

To Walters calendar of events

Things to do near Walters, OK