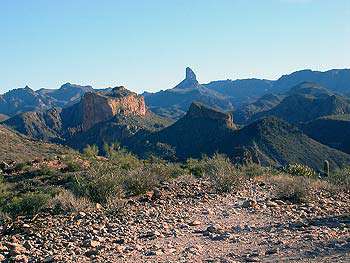 Weaver's Needle is a prominent pinnacle that towers over much of the region east of Superstition Mountain and had played a major role in the legend of the Dutchman's Lost Mine. This famous landmark was named after Pauline (Paulino) Weaver, a mountain man, guide, prospector and early Arizona pioneer. Weaver first visited the area in 1825 when the region was still part of Mexico. Weaver's Needle appeared on military maps as early as 1853, making it one of the oldest Anglo-American named landmarks in the Southwest. Weaver's Needle appeared on maps almost two decades before Superstition Mountain did.