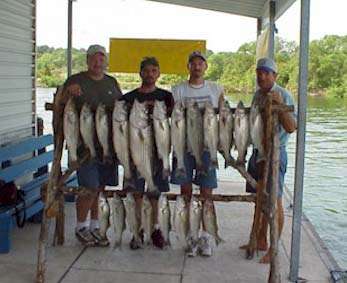 Lake Whitney is one of the prettiest lakes in Texas. This, combined with excellent public access and good fishing for many species, makes it a popular destination. It offers top-notch angling for striped bass and white bass, along with unique and diverse opportunities for smallmouth bass and trophy blue catfish. Texas anglers who have not fished Whitney are missing out on a great experience. The long winding lake offers a variety of shoreline cover from gently sloping blackland banks with abundant cedar and hardwood timber, to majestic limestone bluffs and rock points.

Lake Whitney provides some of the best striped bass fishing in the state, with March through May being the best months. Bank anglers are most successful fishing below sand or gravel bars on the Nolan and Brazos Rivers above the reservoir. In the main lake, anglers fish on windswept sandy beaches using shad or inland silverside ("ghost minnows") for bait. Boat anglers find stripers in the open reservoir feeding on large schools of shad or near submerged brush or timber. Topwater lures, jugs, and live bait are all effective at this time of year. From June through September, the lake is stratified, with little oxygen and cooler temperatures below 20 to 30 feet. Stripers seek out the coolest water they can find with tolerable oxygen levels. Trolling or drift fishing using large diving baits, jigs, or live bait may catch these suspended fish. Most summer catches are made in the middle and lower portions of the reservoir. In October and November, stripers inhabit all depths. They are frequently found along river channels in deep water, and occasionally feeding at the surface. From December through March, troll river and creek channels using large jigs and other artificial baits. Many wintertime catches are made fishing off the bottom with live bait, slabs, or jigs.

White bass migrate up the Brazos and Nolan rivers to spawn from March through May. Best catches are made below sand and gravel bars and along sandy shorelines. Anglers use a wide variety of baits including minnows, jigs, slabs, and spoons. White bass fishing is productive in the main reservoir from April through November. Concentrations are most commonly found near sandy beaches, on roadbeds, and near submerged timber in shallow water. Large schools frequently surface in open water while feeding on schools of shad. Anglers can find them by using sonar or observing gulls that feed on shad. Most activity occurs in early morning and late afternoon. Tail spinners, spoons, and small jigs are good bait choices.

Spring is the best time to catch quality size largemouth bass. From March through May, fish are in shallow water 2 to 15 feet deep. At this time of year, bass are caught along shorelines and in coves on spinner baits, topwater baits, plastic worms, and crank baits. Anglers are most successful in areas with flooded terrestrial vegetation, submerged brush or logs, or inundated willows. From June through August, largemouths are usually found at depths of 10 to 20 feet in the clearest parts of the reservoir. However, some may remain at shallow depths during the day in the murky "off-colored" water. Productive baits include plastic worms and deep-diving crank baits. In September and October, bass may be caught near the surface or in water less than 10 feet deep. From December through February, anglers should concentrate on depths of 15 to 30 feet, using plastic worms, jigs, and deep-diving crank baits. Smallmouth bass fishing can be excellent, especially in the middle and lower portions of the reservoir where the water is clearer and rocky habitat predominates.

From early March through May, smallmouths concentrate in rocky coves and the backs of creeks. From June through August, they remain in or near deep water and night fishing is best. Fishing heats up as the water cools from October through December. Medium-sized crawfish-colored crank baits, sassy shad, and Carolina rigs seem to produce the best results.

Crappie fishing is best during the March-April spawning period when fish are concentrated in water 3 to 15 feet deep near submerged brush and timber. From May through September, crappie are commonly caught near submerged timber, bridge pylons, or submerged boulders in water exceeding 10 feet in depth. The middle and upper ends of the reservoir are best. Medium-sized minnows and small marabou or tube jigs are good choices.

Blue, channel, and flathead catfish are all present in Lake Whitney. All three species can be caught year-round, but fishing is best from April through June, when catfish are spawning. Most spawning occurs in shallow coves or along cut banks in submerged timber or sparse, large rock, with adjacent deep water. Channels and blues can be caught in warmer weather by drift fishing across shallow main lake flats with cut shad, shrimp, worms, or commercial dough or dip baits. Anglers can improve their success by "chumming" likely spots with grain that has been soaked in water for a week or two. Many anglers fish for trophy blues from December through March. Best areas are near channels and submerged brush or rock. Fish over 40 pounds are possible, and often caught on live shad. Flatheads also generally prefer live bait, but very fresh cut bait can be used. Flathead anglers should target areas with timber and brush piles along cut banks at night. Trotlining is a popular and effective method for catching all three species, and is generally more productive in the upper parts of the lake.

Anglers can enjoy limited success with sunfish during April and May by fishing spawning beds in shallow coves with sandy bottoms with crickets, mealworms, or garden worms.

Description of Whitney Lake Hunting Zones General: Not all areas of public land are clearly fenced or readily identified. It is the hunter'

CEDAR CREEK PARK Cedar Creek Park has 20 camp/picnic sites with a ground cooker/fire ring. Water faucets are located throughout the park. There is one restroom (with toilet facilities only)

Lake Whitney State Park is located along the east shore of Lake Whitney west of Hillsboro in Hill County, near the ruins of Towash, an early Texas settlement inundated by Lake Whitney. Towash Village was named for the chief of Hainai Indians, who moved into the area in 1835

Ray Roberts Lake has emerged into a very productive fishing lake, growing in popularity among anglers. The current lake recor...

Thanks to the Texas Wildlife and Parks Department for the great information. Follow the link below for more detailed infor...