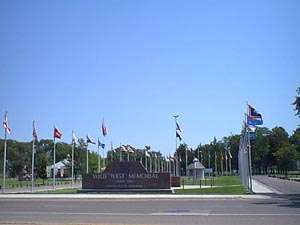 The focus of the Wild West Memorial is the life-size bronze statue of Buffalo Bill enclosed in a gazebo. Surrounding the gazebo are forty-eight U.S. state flags, each flown from individual flag poles. Each flag represents the U.S. states visited by Cody with his Wild West Show.

The bronze statue was created by British artist Bryan Mickleburgh and given to North Platte on behalf of the people of England. The statue was placed in Cody Park and dedication ceremonies were held in June 1998.

Things to do Memorials near North Platte, NE