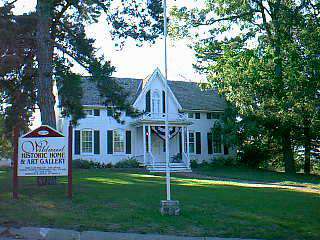 When Jasper Ware, an early Nebraska City banker took his wife, Ellen Kinney, to the west edge of town, pointed out the heavily wooded area south of Arbor Lodge, and said he wanted to build her a country home on the site, she responded, "Oh Jasper, I couldn't live in these wild woods!" Thus the name "Wildwood" was given to the Victorian house. Built in 1869, Wildwood Historic Home was considered a "Country Home" in the days of horse and buggy suburban living.

While touring the ten-room home, visitors get a feel of the Americana Era. The Ware family's belongings and the many articles donated to the home reflect the finest cultural aspects of the time. The two parlors are decorated with period furnishings, oriental rugs, velvet, and lace. Visitors will enjoy the ebony grand piano and the beautiful R.S. Prussia and Haviland China in the dining room, the hand-crafted ettigere in the south parlor, the burled walnut banister of the hall stairs, and the fully appointed bedrooms upstairs. Visitors will be amazed by the crazy quilts and handwoven coverlets on the beds dating back to the early 1850s.

The original brick barn, adjacent to the house, has been converted into an art gallery and gift barn. The gallery is a showcase for crafts-people and artists from the Midwest who rotate on a monthly basis from April through October.