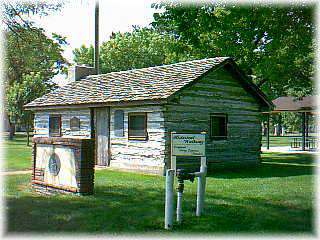 The Pony Express Station which stands in the Cozad City Park was known officially as the Willow Island Station and was located just south of the present Darr Bridge. The station began in 1838 when an Indian trader named Pat Malalley stopped to camp along the Platte River near an island covered with willow trees. Mr. Malalley first lived in a sod shack and stocked supplies to sell to the Indians. This Malalley Ranch became not only a trading post for Indians but also a camping place for wagon trains because there was water available and wood for repairs and fuel. Later, Pat Malalley built a log house of red cedars which he found in the canyons to the west. He used wooden pegs in the construction and he plastered it with clay which he found in the hills to the south.

On April 3, 1860, the Pony Express was started. Riders on horseback carried the mail non-stop from Missouri to California. The postage began at $5.00 per half ounce and later was raised to $10.00 per half ounce. The rider changed horses at relay stations about twelve miles apart. An average day's ride for a pony express rider was 75 to 100 miles. Each time he changed horses he transferred his saddle bag (called a mochila), which had four pockets of mail to the new horse. The leap to the horse took about two minutes. There were about 90 pony express riders, 119 relay stations, and 400 to 500 horses used in the operation which existed for eighteen months.

In 1936, the American Legion Post No. 77 of Cozad, approved a committee of four men, Carl Gustafson, Ralph Allen, Buck Smith and Sam Schmeeckle, and authorized them to purchase the Malalley log house, the official Willow Island Pony Express Station where riders exchanged horses, from the owner G.J. Baldwin for $75.00 and to bring it to the Cozad City Park. The house was taken down log by log and reconstructed to its exact size with all doors and windows in authentic places.

It was the desire of the Cozad American Legion, and the dedication of the four men who moved it, to preserve the original Willow Island Pony Express Relay Station as a memorial to the early riders of the Pony Express and the bravery and endurance of the early Nebraska pioneers and settlers.

Things to do Pony Express near Cozad, NE