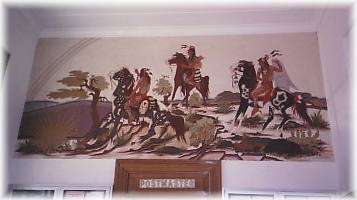 Located in the lobby of the Nowata Post Office is the 1943 mural by Oklahoman, Woody Crumbo.

Crumbo, a Potawatomie Indian born in 1912 near Lexington, Oklahoma, was credited with more than 1200 one-man art shows during his career. His work appears in collections throughout the U.S. and abroad, including the New York Metropolitan Museum of Art and the collection of Queen Elizabeth of England. Woody Crumbo was inducted into the Oklahoma Hall of Fame in 1978.