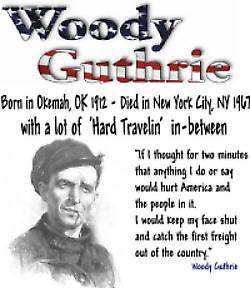 Woody Guthrie was born in Okemah, Oklahoma on July 14, 1912. Woody encountered family tragedies early in life beginning with the death of his sister and later his mother. He attended school in Okemah where he was in the Glee Club, on the Panther Staff, and joke editor for the Publications Club. At his junior year his father sent for him to come to Pampa, Texas. Eventually Woody traveled all over the country.

Cleta Brandon, a classmate of Woody's said, "He was an entertainer. He could sit down at the kitchen table and make up a song about anything, and we listened."

Woody Guthrie wrote nationally known songs such as "Grand Coolie Dam," "Talk 'n Blues," "So Long It's Been Good to Know You," "This Train is Bound For Glory," and his most famous, "This Land Is Your Land."

Clifton Fadiman predicted in the New Yorker that some day people will wake up to the fact that Woody Guthrie and the thousand songs that leap and tumble off the strings of his music box are a national possession like Yellowstone and part of the best stuff this country has to show to the world.

Former Secretary of the Interior Stewart Udall agreed, proclaiming in 1966 that Guthrie brought to his songs "a heart as big as all outdoors." "Woody was not a passing comment on the beauties of nature, but a living, breathing singing force in our struggle to use our land and save it too."

On December 8, 1978, former President Carter stated, "I don't think anyone better expressed the unfulfilled ambition of deprived Americans better than Woody Guthrie. His songs have inspired us for many year."

Janelle Yates wrote, "Throughout his lifetime, Woody was a prolific writer, authoring more than one thousand songs, an autobiography, a novel, several songbooks, plus thousands of letters and newspaper columns. He scribbled his thoughts, lyrics and other musings in notebooks, on napkins, in the pages of date books and diaries, on the backs of envelopes, on discarded paper - wherever he found blank space available. His thoughts were always flowing and, until he became incapacitated by Huntington's disease, his hand recorded them dutifully."

Come visit us in Okemah, Oklahoma

Walk along the boardwalk in Territory Town and look into the store fronts of the old western town. The museum exhibits include Civil War relics, Wells Fargo items, Indian artifacts, western memorabilia, and souvenirs.

Okemah boasts one of the finest golf courses in the area. Our nine-hole golf course is the site of many hours of family fun for local residents. Golfers from area communities are attracted to this course and impressed by its caliber. Built by volunteers in 1991

The Okemah Public Library is located in a historic rock building constructed with the aid of WPA funds. Enjoying a scenic view of Okemah's Noble Park, it is within a block of the Okemah Middle School.

Things to do Famous People near Okemah, OK