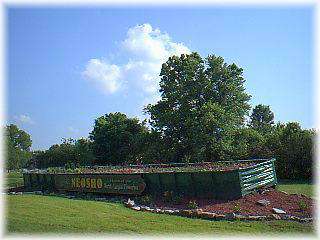 Neosho, Missouri, nationally known as the Flower Box City, is proud to be home of the world's largest flower box. After acquiring a railroad gondola car, it was transformed into a flower box. It's 66 feet long, eight feet wide and 44 inches deep. The community of Neosho came together and donated their time, energy, and funds to make this a reality. The flower box is filled with flowers, shrubs and trees and is a beautiful addition to Morse Park. Located on the North side of the City on College Street, just before the Hickory Creek Bridge.

Things to do One Of A Kinds near Neosho, MO