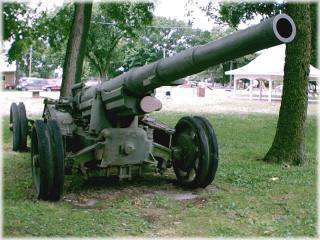 The cannon located north of the Veterans Memorial is one of the first things to attract attention in Logan Memorial Park. The first cannon was made by Henry A. (Daddy) Diltz in the early 1900s. Every fourth of July he would go to the park and fire his cannon. Later, it was sacrificed for scrap metal to help the war effort.

The cannon which is standing in the park today is a World War I cannon presented to the park by the government in the early 1940s.

Things to do Monuments near Cherryvale, KS