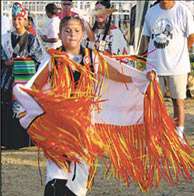 The ever-popular Wyandotte County Fair attracts more than 100,000 visitors a year, it features livestock exhibitions, country-music concerts, bull riding, a draft horse pull, a demolition derby, carnival rides, a 4-H livestock auction, concerts and several more attractions. It will be an opportunity for fair-goers to learn about agriculture.

The first Wyandotte County Fair was held in 1863 on the levy at First and Nebraska. The admission price was 25 cents. The Fairgrounds was moved to its present site near 98th and State in 1953; the fair was first held there in 1954.

Its history started much the same as most fairs, with livestock exhibitions. Future Farmers of America, 4-H, Kansas Grange and homemakers gradually started exhibiting their projects. Early fairs in Wyandotte County were small and intended only as venues for judging 4-H projects.

The 4-H displays gradually attracted enough people and generated enough financial backing to become events on their own. Wyandotte County developed its county fair much later than most counties. One of the first took shape during the Great Depression. Its forerunners were exhibits stemming from the founding of the Wyandotte County Extension in 1917.

The 4-H drew from the large rural population in Wyandotte County; in 1932, 205 members enrolled in ten 4-H Clubs here. Members were encouraged to exhibit projects and were honored for achievements. Achievement Days were held at the Edwardsville High School Gymnasium. Exhibits were shown in Wyandotte County at picnics or gatherings sponsored by civic organizations.

In 1932, 4-H clubs gave demonstrations and made exhibits at an annual picnic of the Wyandotte County Farm Bureau, at Lavin's Tourist Camp in the Maywood Community on State.

There's no comparison between the earliest fairs and the fair today. The first fair was temporary and had only four tents for livestock and two for home economics exhibits. It's been held at Morris Feed Yards near Argentine, at Washington Rural High School, Bethel; at Lakewood Park, Bonner Springs; at Shady Rest Camp on State; and at Piper High School.

During those years, county agents and the Fair Association collected funds for a permanent fairgrounds. Stock was sold for a permanent fair and property was bought at the fair's present home near 98th north of State.
Since then, the fair has grown to include city-oriented events and exhibits. It was opened to general and public competition in 1961.

The Strawberry Hill Ethnic Cultural Society was formed in 1988

VerrĂĽckt, the World's Tallest Waterslide opening in 2014 to guests of Schlitterbahn Waterpark Kansas City, was officially verified by Guinness World Records prior to its opening. The VerrĂĽckt stands at a record-breaking height of 168 ft 7 in. After the initial, nearly vertical drop of 168

Things to do near Kansas City, KS