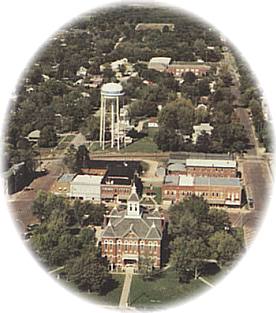 Ideally situated in southeast Kansas at the crossroads of U.S. Highways 54 and 75, Yates Center, founded in 1875 as the site for the county seat, has grown with Woodson County into an important trade center for the area.

The Yates Center Courthouse Square Historic District was placed on the National Register of Historic Places in May of 1986. It is comprised of 41 buildings, two structures and one site built between 1883 and 1928. The district is made up of a concentration of two-story sandstone and brick Italianate and one- and two-story brick. Early 20th Century Commercial buildings are located on all four sides of the Courthouse Square. These buildings represent the historical, judicial and commercial core of the city and display a moderate to high degree of architectural integrity.

Up on a hill, on the claim of Abner Yates, there were several springs of "living water", springs that did not go dry, springs that gave the land in that day the only value it had. Abner Yates was a character of the pioneer sort who came to Kansas in the late '60's, after the civil war to invest in land. He found a lot of land in Kansas to invest in at the time, and took a patent from the government for all of it that he could pay for. Casting his eyes about for whatever advantages the new country offered, he found the springs of water on the high hill where Yates Center now stands. Around the springs he laid out his real estate possessions. Abner Yate's land was found afterwards to be in the geographical center of Woodson County, although Abner's keen sense of land values were inclined by the water rather than by geographical centers. When the people of Woodson County wanted a county seat with water enough for a cool drink, for cooking purposes and for an occasional bath, the campaign issue was raised: "we want our county seat in the center of the county."

This idea was brought up at a meeting being held at the town of Defiance, but those who wished the county seat to remain at Defiance said it would cost too much for the land. But to everyone's surprise, Abner Yates, who was sitting on a rail fence at the time, stood up, raised his hat and shouted, "No it won't cost the county a single cent. I'll give you all the land you want for a county seat." That settled the election. The towns of Kalida and Defiance were moved to the site which was to become Yates Center. The structures were hoisted upon logs, with huge wooden wheels attached and pulled by oxen or horses up the hill to Yates Center. One can still see the deep ruts made during the move. That was the beginning of Yates Center. Abner Yates spent his remaining years in Yates Center, until his death in September, 1904. Abner and his wife are buried in the Yates Center Cemetery. In addition to the land donated above, Abner gave an entire block of ground for the courthouse, he gave land for a city park, a county jail, and each church had a building location and the first two children born in the town were to receive a piece of ground each. Abner Yates, once a very rich man, as riches were rated in those days, died in poverty. But his is still revered as an honest man, who was so honest, indeed ... Judge Hogueland describes, "he leaned backwards in order to be square with everyone."

South Owl Lake has approximately 276 acres of surface water. Nestled among the Blackjacks, South Owl Lake and it's surroundings offer a beautiful setting for an exciting fishing experience or wonderful family outing.

Yates Center Reservoir has approximately 212 acres of surface water, with 500

THIS IS NOW AN ARCHIVE PAGE -- WE HAVE LEFT IT UP BECAUSE SHE WAS A REALLY UNIQUE LADY. MY WIFE AND I ATE THERE AND SHE WAS SOMETHING ELSE. WE HARDLY COULD BELIEVE THE PRICE AND THE FACT THAT YOU PAID INTO THE REGISTER YOURSELF AND MADE YOUR OWN CHANGE. --- $1.00 EACH FOR THE MEAL!!!!!!!!

Yates Center, KS One Of A Kinds

We currently do not have any events for Yates Center, Kansas in our database. If you know of events taking place, please add the event
.

Things to do near Yates Center, KS