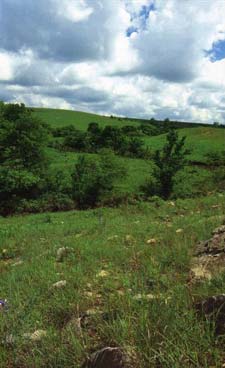 Butler County has been a rich cattle grazing land since the 1860s. As early as 1857, the first pioneers looked down on the beautiful Walnut River valley and decided to make it home. At the center of the Flint Hills, the area has changed little since Captain Zebulon Pike noted the hills covered with flint rock cobbles during his 1806 expedition across Kansas. The Name "Flint Hills" had identified the region ever since.

Since the beginning a lore of cowboys, cattle drives, and western style living has entertained and amazed the area traveler. The first cattle drives began in Texas during 1865 when animals were driven to Kansas railroads through the Flint Hills. By 1885 the wild Texas cattle drives were over and 5 million cattle had passed through the Hills on their journey to eastern markets. The era of custom grazing of out-of-state cattle began, and today over 1 million head of cattle are fattened annually on the lush pasture land.

The peaceful tranquility of the region changed forever when oil was discovered near El Dorado in 1915.

Several area driving tours are available for the interest of the photographer, bird watcher, fossil hunter, antique lover, fisherman or amateur historian. So treat yourself to one of the best kept secret in the land - Butler County, where rich history, breathtaking scenery, and adventure abound.

The Augusta Historical Theatre, listed on the National Register of Historic Places, is a perfect example of the architectural elegance and grandeur of movie palaces in the 1920s and 1930s during the height of grand theatre building in the United States. The Augusta Theater opened June 19, 193

The Augusta Country Club golf course is a nine hole course, each with its own set of additional tees which allows it to be played as an 18 hole course. The club house is complete with snack bar, lounge and a full line golf shop. Weekly Men'

The Beaumont Hotel was created in 1879 as a stagecoach and railroad stop to shelter weary pioneers when the railroad brought cattle barons and frontier society to The Beaumont.

Where Special Events Happen El Dorado Lake is located just north and east of the City of El Dorado at the edge of the scenic Flint Hills. The lake has approximately 8,000 surface acres of water with 98 miles of shoreline. There are approximately 6,000

The Augusta Historical Museum houses over 30 exhibits of regional history. Visit the two-story log cabin on its original site which served as post office, general store, and school. The Museum offers rotating exhibits covering time era from the mid 1800s throughout the 1940