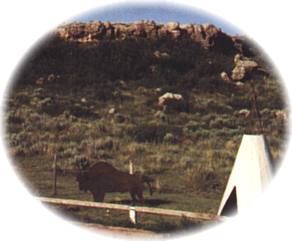 Cheyenne County, Kansas was named after the Cheyenne Indians, who once resided in the area. The area was surveyed in 1873, with settlement beginning in 1875. Many of today's residents can trace their families back to those first settlers.

Cheyenne County is rich in geological and historical sites. The Breaks called by the locals a "mini Grand Canyon," is located on the northern edge of the county. The Breaks feature an extremely rough terrain of deep ravines and gullies - a marked contrast to the plains generally associated with the area. Eleven miles north of Bird City, the Round Hole Campsite memorial, marks the site used by General Custer, Colonel Bankhead and Lt. Colonel Bradley. The Cherry Creek Encampment, located two miles northwest of St. Francis memorializes the Cheyenne Indian survivors of the Sand Creek Massacre. Near Bird City, a portion of the Ancient Indian Traders' Trail is also visible. Flowing from the southwest to the northeast, The Republican River divides the county in half. The River Road parallels the river, allowing a leisurely drive with many chances to view local wildlife, including wild turkey, deer, pheasant, quail, hawks, eagles, rabbit, and beaver. The river offers numerous recreational opportunities for camping, fishing, hunting, picnicking, or a leisurely stroll down the scenic River Walk.

This site features a memorial to the Cheyenne Indian survivors of the Sand Creek Massacre on November 29, 1864. Created by a local historian and metal sculptor, Tobe Zweygardt, a teepee is guarded by an Indian brave astride his horse atop a nearby bluff. A brochure is available.

A beautiful one-mile walk along the Republican River on a mowed and maintained path lined with native Cottonwood, Hackberry, Green Ash, and Red Cedars. Open year round for seasonal enjoyment. Tubing during high water is exciting along this stretch of the river.