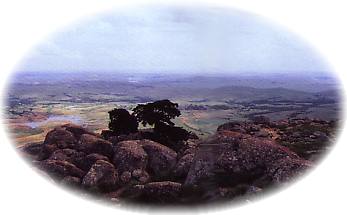 In southwest Oklahoma, the golden shortgrass prairie extends for mile after mile - proving this captivating corner of Oklahoma more than lives up to its Great Plains Country title. Less than a century and a half ago, the Southern Plains were the domain of the Kiowa and Comanche who hunted buffalo until the herds were almost exterminated from the plains in the last half of the 19th century. Today, bison, longhorn cattle and elk roam free at the 60,000-acre Wichita Mountains National Wildlife Refuge.

The Wichita Mountains are remnants of a mountain range that was formed more than 500 million years ago and subsequent erosion has resulted in the exposure of the granite and gabbro core. These mountains rise abruptly from the relatively flat surrounding plains, with several peaks on the refuge exceeding 2000 feet above sea level, interspersed with valleys and prairie grasslands.

It would be another century, on January 8, 1869, before Major General Philip H. Sheridan staked out the site that would become Fort Sill.

In July 1901, 29,000 homesteaders registered for the land lottery at Fort Sill. On August 6, the town of Lawton sprang up and quickly grew to become the third largest city in Oklahoma.

Lawton-Fort Sill flows southward into a flat plain with the Wichita Mountains serving as a dramatic backdrop to the north. Thousands of tourists visit the National Wildlife Refuge in these mountains each year to explore an area full of roaming wildlife, romantic history, picturesque scenes, and the towering splendor of these mountains.

The peak of Mt. Scott, which towers 2,465 feet above sea level, can be reached by venturing the winding road that climbs above the refuge floor. The Holy City of the Wichitas is located nearby. This is the site of the famous Easter Pageant held each year on Easter Eve. The structures are recreations of the ancient city of Jerusalem and are open to the public for viewing. There are also several lakes and streams in the surrounding areas.

Mount Scott is one of Oklahoma's most prominent mountains, rising 2,464 feet above sea level. Located on the eastern edge of the Wichita Mountains Wildlife Refuge, it is a legendary site which boasts tales of ancient spirits, Spanish gold and buried outlaw loot.

Comanche Chief Quanah Parker had stars painted on the roof of his home to mimic those on the uniforms of the U.S. military officers. The home is listed on the National Register of Historic Places.

The Little Chapel was built in 1902 and is believed to be Lawton's oldest remaining public building. Its stained glass and restored antique organ are a highlight of any visity to Lawton .

The Wichita Mountains Wildlife Refuge, the Access Fund and the Wichita Mountains Climbers Coalition have come together to support and present a quality climbing experience at the Refuge. The following guidelines have been established between the three organizations.

The Historic Mattie Beal Home is a 3,580 square foot, 14-room mansion constructed in 1907-1909. It sits on a portion of the 160-acres selected by Mattie Beal, the young woman whose name was drawn second in the Kiowa-Comanche-Apache Land Lottery of 1901

At the Museum of the Great Plains, the natural and cultural history of the Great Plains of north America is studied and shown in many exhibits and programs that will be enjoyed by all members of the family. Special events include a twice-yearly encampment of 1830