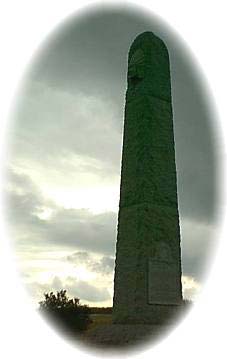 The beautiful Frenchman River Valley draws many visitors for hunting, fishing, and the celebrations. Trenton Dam and Swanson Reservoir, located between Trenton and Stratton on U.S. 34, offers a variety of activities for outdoor enthusiasts.

In earlier days, the Republican River valley was the hunting grounds of the Pawnee, who held their spring and fall hunts on the buffalo range between the Platte and Smoky Hill Rivers in Kansas. It was on the summer hunt of 1873 that the Pawnee hunting party of 700 men, women, and children were massacred by Sioux Indians in what is now called Massacre Canyon. This greatly weakened the Pawnee tribe and ended forever the buffalo hunting.

Homesteaders continued to pour into the area. After years of talk and promises, the Burlington & Missouri River Railroad finally extended its line through the area. The tracks reached the middle of Hitchcock County in 1882, at the little settlement of Trail City (later to be renamed Trenton), and a small depot was built.

In 1873 Governor Furnas granted permission to organize a county named for Phineas W. Hitchcock (surveryor-general and U.S.Senator). Culbertson was named county seat since it was the only town, not counting the little cattle-trail crossing.

The town of Palisade boasts a beautiful city park with a picnic area, including a shelter house, baseball diamond, swimming pool and camping facilities. A smaller Centennial Park on main street also has a picnic area. Each year Palisade holds a "Pioneer Days Celebration" the second weekend in June.

Culbertson has two parks, one with a municipal swimming pool, a baseball diamond and three churches. The Stone Church, south of Culbertson, is registered with the Nebraska Historical Society. Each year, Culbertson holds an all-day July 4th celebration including a parade, quilt show, fireworks display and dance. In August, Culbertson is the site of the Hitchcock fair.

Just west of Trenton is Swanson Reservoir and Trenton Dam, which provides recreation in the form of hunting, fishing and boating, RV facilities, camping, picnicking and water skiing. Open for its second year of business is the North Shore Marina, located near the turnoff to Swanson Lake.

Near the lake is a monument to commemorate the last Indian battle fought between the Sioux and Pawnee Indians, called Massacre Canyon.

Visitors are invited to stop at Pitner Park in Stratton, which offers a swimming pool, tennis and basketball and sand volleyball courts. The town's playground also includes $10,000 worth of new equipment. At the northeast corner of the city park is the Little House Museum with special displays of area interest.