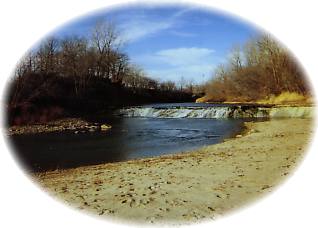 Long before Johnson County had any settlers, early travelers passed through the area on one of many early-day trails which contributed to its reference as the crossroads for Seven Trails. Prior to the white travelers, the Oto Missouria occupied this area and probably initiated most of these trails. Evidence of Indians from the Prehistoric Farmer Period, 1200 - 1450 AD, were unearthed near Tecumseh in the 1930s and a few items are on display at the Johnson County Museum in Tecumseh.

Johnson County was originally part of Forney County when Nebraska was a territory, but in 1855 it was divided and the western part became Johnson, the remaining became Nemaha County. The county was named after Col. Richard M. Johnson who was a prominent army officer in the War of 1812 and Vice President of the United States from 1837 to 1841. The legend is that Johnson surrounded and killed the famous Shawnee Chief, Tecumseh, in 1813 during the Battle of the Thames in Canada.

Johnson County authors include Eugene Manlove Rhodes, Hal Borland, Col. Barney Oldfield, Izma Buethe Seeba and Sharon Ocker. William Lawrence worked for the Lincoln newspapers and went on to New York, where he was with the Washington Bureau of the New York Times, appeared on "Face the Nation," was elected President of the National Press Club and also worked for ABC. TV and screen personage, Roy Barcroft, played the villain in many western movies, including those starring Gene Autry, Roy Rogers and Tim Holt, plus being in the TV show, "Have Gun - Will Travel." TV's "Mrs. Baxter" in the show, Hazel, was played by Whitney Blake. All of these were born in Johnson County.

In addition to the County Museum, Tecumseh is also the birthplace of Col. Barney Oldfield and houses the Nebraska State Exhibit of "Believe it or Not - The Life and Times of Vada and Col. Barney Oldfield." The exhibit features Barney with Presidents Eisenhower and Reagan, and George Foreman, a Hitler book and the Longest Running Publicity Stunt ever! The exhibit is very educational and relates history of World War II and other events that Col. Oldfield has been involved in since his birth.

Other sites to visit while in Johnson County include the old covered bridge in Cook that has been repaired to working condition. Cook was first known as "The Artesian City" because of the numerous artesian wells in the area. One of the wells is located in Windmill Park just west of town. Crab Orchard is a small village of which many of its historical landmarks have disappeared except for three of the wild crab apple trees for which the town was named. They still stand north of the Crab Orchard Cemetery.

Elk Creek is a small town of 115, but very active in community improvements and projects and proud of the safe and enjoyable atmosphere to live and raise their families. Sterling is a thriving community with over 40 businesses, and is the birthplace of renowned author, Hal Borland, and the Martin Luther Home. Sterling offers overnight camping at the City Park. The annual Deer Creek Sodbusters Antique Machinery Show held in August has grown into a "Local Legacy." Held as a "real working farm," the event has expanded to field demonstrations that allows a better educational opportunity for children and interested adults to see first hand how life on the farm was for their grandparents and great grandparents. Buildings have been brought in to complete the historic atmosphere including the barn with antique tools and household items, the 1883 Chapel with original artifacts, the Jail, the Saw Mill, the Rusty Iron Museum, and antique working machinery used in the demonstrations.