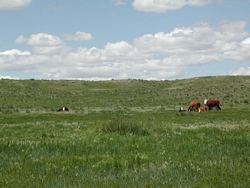 Coronado traveled across this land on his return to Mexico. Kiowa, Cherokee and Apache Indians hunted bufflo until Army generals ordered the massacre of 400,000 in one day, believing "the only way to get rid of the Indians was to kill the buffalo."

Thirty-three miles of historic Santa Fe Trail cross 108,000 acres of the Cimaron National Grassland. Today one can still see ruts and the site where freight wagons camped at Middle Spring and used Point of Rocks as lookout point from 1821-1880.

A former trading post, Richfield became the county seat. It was shot up on many a Saturday night by cowboys who traveled the National Cattle Trail from Texas to Nebraska because of the cattle quarantine.

The Santa Fe Trail Railroad headed southwest from Dodge City, and the towns of Rolla, Wilburton and Elkhart sprang up along the southern border because of the tracks.

Morton County was established in 1886 and after several battles for the county seat, it was moved from Richfield to Elkhart in 1961.

A visit to the Morton County Historical Museum is an exploration in history. As you enter the museum, you will note the beautiful paintings around the room, depicting the history of Morton County. All are painted by local artists, reflecting pride in sturdy pioneer ancestors.

Visitors will want to see "8 Mile Corner", where the states of Kansas, Colorado and Oklahoma meet. It is located eight miles west of Elkhart on the State Line Road.

A short distance east of Point of Rocks is Middle Springs, a small oasis on the prairie where water rises from an ever-flowing artesian spring. It was the only reliable watering spot for 30