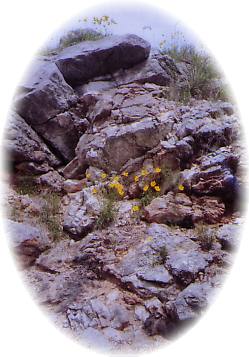 Murray County encompasses the ancient and spectacular geologic exposures of the Arbuckle Mountains. Planning a visit to the area should include several days in order to see the myriad of examples of natural wonders revealed in the opening of the earth's crust for even the unexperienced observer to marvel from uplifted layers of the earth's surface at Turner Falls to the gurgling sulphur springs in Sulphur. Early discoveries by explorers and settlers in the area can be studied at the musuem in Davis.

During the late Paleozoic Era, there was a tremendous pressure underground which resulted in a great uplift that formed the Wichita, Arbuckle, and Ouachita Mountains. The thick sedimentary layers that had been deposited early horizontally in the inland seas were now uplifted, folded, faulted, and eroded, exposing older rocks underneath and forming new deposits.

The rocks of the Paleozoic Era contain oil, gas, coal, and other mineral deposits that are economically important to Oklahoma. These Paleozoic rocks crop out over 75 per cent of the state, and are covered by much younger deposits in the remaining 25 per cent of our state.

Mountain building is a very long process in which the tremendous power of the forces of the Earth are realized. The formations found in the Arbuckles demonstrate how immense beds of rock have been folded, layered vertically, or overturned by the forces of nature.

Visit Sulphur's past! Find records from over 125 genealogical/research books from the Murray County Court House, periodicals, out of print books, school records from the early 1900'

Whether you're a farrier, a horseman, or just interested in learning about one of the horse world's oldest trades, a visit to this museum gives an entertaining look at the tools, life and products in the horse-shoers' world.

Play golf - the game of a lifetime! This 9-hole double tee golf course has a par of 72