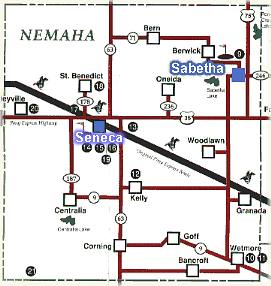 Many things went into the birth and growth of Nemaha County and its towns. Like many others across America, these small towns consist of more than just a few square miles and square blocks of wood and bricks and soil, they also consist of the vision and toil of hundreds of individuals. Let us quaint you with our: HOMETOWN HOMILIES.

Seneca had been staked off and spoken for as a suitable town seat by J.B. Ingersoll in 1857. Itbecame a part of the military road between Fort Kearny and Fort Leavenworth, the Overland Stage Route and the Pony Express Route.

Sabetha the unique! There is only one town in the world with a name similar to Sabetha. This is a very rich agricultural region, and there is health in the air and wealth in the products of the ground.

The town was founded in 1886 with the advent of the Rock Island Railway. The name is appropriate on account of so many Swiss settlers who are from Berne, Switzerland. Many pioneers believed that because Bern is reportedly 1,600 feet above the sea level, with good drainage, that it was one of the most healthful locations in the territory.

Baileyville, the westernmost town of the county, was named in honor of ex-Governor Bailey's father, who laid out the town seven miles west of Seneca. The most interesting thing of Baileyville is a community hall, built for the use and entertainment of both villagers and country people of the surrounding farms. Club meetings, social and business gatherings were held here. Named Marion Hall, it celebrated its 100th birthday in 1996.

Corning was established as a post office in 1867 by Dr. N.B. McKay. When the Central Branch of the Missouri Pacific Railroad was extended through Nemaha County, Corning too, had to move to the railroad which is the present site.

Col. Cyrus Shinn founded the town of Oneida in 1873 on the Grand Island Railroad. One thing was required of Oneida settlers on the Shinn lots, however, and that was the settler was not to sell liquor or allow it to be sold on the premises. The result was that Oneida had never had a saloon and Gilman township was the only one in Nemaha County that returned a majority of Governor St. John, the Kansas Governor whose election was won on the Prohibition ticket.

The first and oldest of several towns in the county that were the outcome of necessary shipping points or the result of railroad traffic. The Central Branch railroad surveyed ground as early as 1866, with a quarter section of ground platted with a section house and station erected and Wetmore was finally launched as an embryo railroad town, named after W.T. Wetmore, vice president of the railroad at that time.

Goff was the direct outcome of the railroad being run through its vicinity and needing a loading station. Goff, being primarily a railroad town and the only one built for the sole purpose, looks like an alien among her flat, level agricultural sister towns, with abrupt hills rising suddenly. The only respectable coasting hill in Nemaha County is in Goff!

Centralia was one of the early villages built on a hill, in 1867, to overlook the fertile valley of the Black Vermillion Stream. But when the Missouri Pacific's Central Branch refused to climb the hill, Centralia was moved to accommodate.

Sabetha Golf and Country Club, located one mile north of Sabetha in Northeast Kansas, is a private club open to members and their guests. The golf course was built in 1923

The Museum is located in the former Nemaha County Jail on 6th and Nemaha Street. The two story brick building was built in 1879 and still contains the jail cells and the resident jailer'

Located in the town of St. Benedict, this church was built in 1891-1894 and is on the National Register of Historic Places

This well is the widest and second largest hand-dug well in Kansas. It is 34 feet in width and 65 feet in depth. The well was dug by hand in 1895. The Seneca Hand Dug Well is listed on the Register of Historic Kansas Places as well as the National Register of Historic Places.

Seneca\'s library is housed in an impressive historic \"old stone church\", built in 1867 by the Unitarian-Universalist Society and was the first church structure to be built in the community. A campaign to raise money for the church was started by Presbyterian minister Charles Parker. In 1931

Purchased by the City of Seneca in 1922, this fire engine was placed into service as part of the community's firefighting equipment. In 1976, the Seneca Volunteer Fire Department restored the engine which is on display at 6th and Main Street in Seneca.