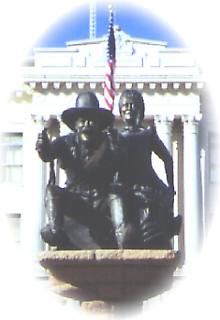 The opening of the Cherokee Outlet was the fourth, and largest, of Oklahoma's five land runs. On September 16, 1893 at 12:00 noon, more than 100,000 land hungry pioneers raced for 40,000 claims available in the Cherokee Outlet Land Opening. The dramatic land run in Oklahoma ushered in an era of agriculture development. Promoters, enticing immigration to the Outlet "P", later named Noble County in honor of John M. Noble of St. Louis who was the secretary of the Department of the Interior under President Harrison, promised the land to be some of the most productive in the Territory. Immigrants from almost every area of the United States and many foreign countries took part in this epic event.

The first night in the settlement of Perry was utter chaos with more than 25,000 people trying to make a claim at the land office. Daylight revealed a city of tents, shacks and wagons all in disorder. Crude buildings were being erected all night and businesses sprang open the next day. Saloons and attorneys flourished and carpenters were in big demand as business owners were trying to accommodate the large crowd of people.