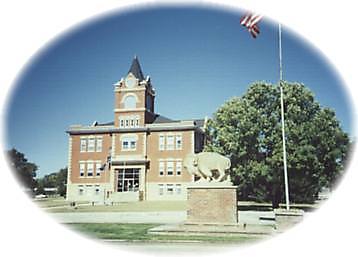 "Travel is so smooth and effortless today that it is hard to visualize the hazards in the mid-19th century. For example, in June, 1859, four mules pulling a Denver bound Pike's Peak Express stagecoach -- six days and 450 miles out from Leavenworth -- were terrified by Indians a few miles northeast of here. Plunging down a precipitous bank, the animals upset the coach and its best-known passenger, Horace Greeley, editor of the New York Tribune. Greeley was soon rescued 'and taken to Station 17, a few yards beyond, where the good woman dressed his galling wounds.'

There were other, more serious encounters with the Indians. On April 23, 1875, 40 men of the Sixth U.S. cavalry attacked 75 Northern Cheyenne on Sappa Creek, 14 miles south. Two soldiers and more than a score of Indians were killed. A Cheyenne raid in the autumn of 1878, brought death to more than 30 settlers on Sappa and Beaver Creeks here in Rawlins and adjoining Decatur counties.

Thousands of cattle were driven through this area in 1876-1885, plodding the Western cattle trail from Texas through Dodge City to Ogallala, Nebraska.

Rawlins County was established in 1873 and named for General John A. Rawlins who was adjutant to Ulysses S. Grant during the Civil War and is said to have had great influence on Grant. He became Secretary of War in 1869 when Grant became president.

The renovated Atwood Depot is now a gift and collectibles store that sits at the edge of Lake Atwood.

This outdoor artwork is painted on the west side of the building at 4th and State Street, by H-D Productions, 1997.

Rawlins County is a hunter's paradise. Nationally known for some of the best hunting grounds in the country, hunter?s come from all over the country to the vast plains of Rawlins County to hunt for Pheasant, Deer, Quail, Dove, Duck and Wild

History surrounds the area and is highlighted in Atwood at the Rawlins County Museum. The museum houses a mural of the county'

The Buffalo Statue is located in front of the courthouse and was presented to the city by local sculptor, Pete Felton, renowned Kansas artist.

Lake Atwood is a beautiful 43

St. Mary's Catholic Church was built in 1917 using concrete blocks that were all hand made by the congregation. It'

A tribute to the early citizens of Herndon is still standing today in the Herndon City Park. The Herndon Ball Diamond is a remarkable example of depression era public works that made life in that time a little easier and alot more enjoyable. Many a ball game has been (and still is)

The Atwood Country Club nine hole golf course is situated by Lake Atwood. It is a golfer's delight with many trees providing cool shade.

The Rawlins County Courthouse was built in 1906 and exemplifies Greco-roman architecture.

This wonderful structure was built in 1906 by Bohemian immigrants from Czechoslovakia. Originally located nine miles north and three miles west of Atwood, the church formerly known as Sts. Cyril and Methodius Catholic Church was moved to the museum complex in 1994 by the citizens of Atwood.