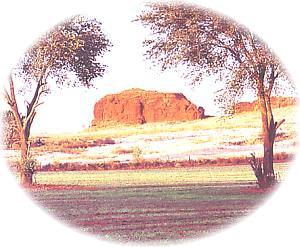 Visitors are enticed with the vast beauty of the rolling red hills. Eons ago a vast inland sea covered this area iron deposts left behind gave our beautiful hills their rich, red color. Fossilized remains of prehistoric animals have been unearthed as have the stone tools and skeletal remains of the area?s first-known human inhabitants, the Mezo-Indians.

The distinctive formations of the Antelope Hills were a landmark for Spanish explorers in the 1500s and later for settlers moving west on the south branch of the California Road. The Comanches, Kiowas and Lipan Apaches dominated this part of the plains until the Cheyenne and Arapaho migrated here in the early 1800s.

Roger Mills County is named in honor of Roger Q. Mills, a Texas Congressman who supported Oklahoma for statehood. Before we were Roger Mills County, this area was known as "F" County, Oklahoma Territory, and Day County. The Land Run of 1892 opened the Cheyenne and Arapaho Reservation to white settlement. Many who live in the area are direct descendents of the pioneers and of Cheyenne Chief Black Kettle?s band.

Lt. Col. George Custer?s attack on Chief Black Kettle?s sleeping village in 1868 is commemorated in the Washita Battlefield National Historic Site, the Black Kettle Museum and the ?Washita Woman? Statue. Other
attractions such as the Strong City Townsite House, Santa Fe Depot,
Minnie R. Slief Community Museum, Metcalfe Art Gallery and Museum, and the Roll One-Room School depict the pioneer heritage and spirit that is a source of pride for residents of Roger Mills County.

Other landmarks include the Veteran?s Monument, Cheyenne Memorial Wall of Fame and Longhorn Field House. The Red Rock Records Vault is all that remains of the old courthouse burned by outlaws trying to destroy evidence against themselves.

One of the oldest powwows in Oklahoma, the Red Moon PowWow takes place the last weekend in May with Native Americans in authentic clothing participating in song and dance contests.

The Pioneer Day Festival on the first Saturday after Labor Day features an arts & crafts show, games, exhibits, food, an auction and much more.

This area is known for some of the best turkey and wild quail hunting in the country, however few know about the quality of our deer herd, which by the way is outstanding! Accommodations are comfortable and private in our “old western”

Built in 1908, the red rock records vault survived the courthouse fire in 1916

This landmark is a unique formation of hills creating a natural horseshoe shape. Custer and his men camped there the night before the attack on Chief Black Kettle, serving as an ideal place to hide Custer'

Step across the threshold of this restored one-room school and see the teacher and scholars in 1910 dress. Relive McGuffy Readers, ciphering, inkwells and pens, lunchtins, outhouses, marbles, roll the hoop, ante over, lye soap, and more in this "hands on" history experience.

The Cheyenne Roger Mills Chamber of Commerce & Tourism is located in the old Black Kettle Museum. Stop in the visitor center and get directions and free brochures. You can purchase our Roger Mills County Afghans which come in 3