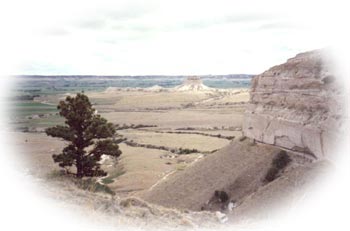 Centuries ago, the area that would later become the Nebraska Panhandle was home to the Pawnee and the Sioux - nomadic Indian tribes who roamed the Plains, following the great herds of buffalo. Later came the mountain men and fur trappers who established a trade system that provided wares for the pioneers traveling westward and later for the settlers.

The character of the people in the communities of Scotts Bluff County is what makes this area prosperous and prepared for growth. It is a character shaped by a rich heritage in the building of the west. The basis of that heritage is an act of creation, since the area has been gifted with a beautiful natural landmark. When such a landmark exists, it serves as a focal point for human activities, dating back to pre-historic man and extending through today and tomorrow. This landmark is Scotts Bluff which is a natural promontory rising 4649 feet above see level. Scotts Bluff National Monument was incorporated into the national park system in 1919.

Between 1830 and the late 1860s, the North Platte River was the median for the two earliest east-west superhighways: the Oregon-California Trail on the south and the Mormon Trail on the North. The Oregon-California Trail penetrated the bluffs through what today known as Mitchell Pass. After the hundreds of miles of flat prairie to the east, the vision of Scotts Bluff was a welcomed sight to the early pioneers, recorded in diaries and sketches and early photographs.

Still visible are deep ruts gouged by thousands of hooves of oxen, and horses and wheels of Conestoga wagons carrying emigrants and their limited possessions westward, first to Oregon and later to California where gold was discovered in 1848. The coming of the railroads was the contributing factor in establishing the town sites Scottsbluff and Gering. Centrally located within the miles of fertile acres in Western Nebraska, these twin cities are separated by the North Platte River, Scottsbluff on the North side and Gering on the south and the village of Terrytown rests between the two. The two cities serve as a regional center for agriculture and livestock production, food processing, manufacturing, finance, health and human resources, retailing, education, tourism, and recreation.

There's more to Scotts Bluff County than history. You'll find all kinds of fun activities to keep you busy. You can boat, fish, swim, or water ski on Lake Minatare, a 2,000 acre lake, which is home to an inland lighthouse, one of seven in the U.S., built by the CCC in the 1930s.

For entertainment in the evening, the place to be is Five Rocks Amphitheater, south of Gering. Movie nights, children's theater, and music ranging from blues and jazz to rock and Dixieland are all featured throughout the summer. Or visit the West Nebraska Arts Center in Scottsbluff, with a different art exhibit each month, or purchase your tickets for professional theater from Theater West Productions at the Western Nebraska Community College.

These are just a few of the things you'll see on your trip. Golf courses, the Riverside Zoo, Wildlife World, antique shops, swimming pools, tennis courts and more are in store for you as you Visit the Valley in Scotts Bluff County.